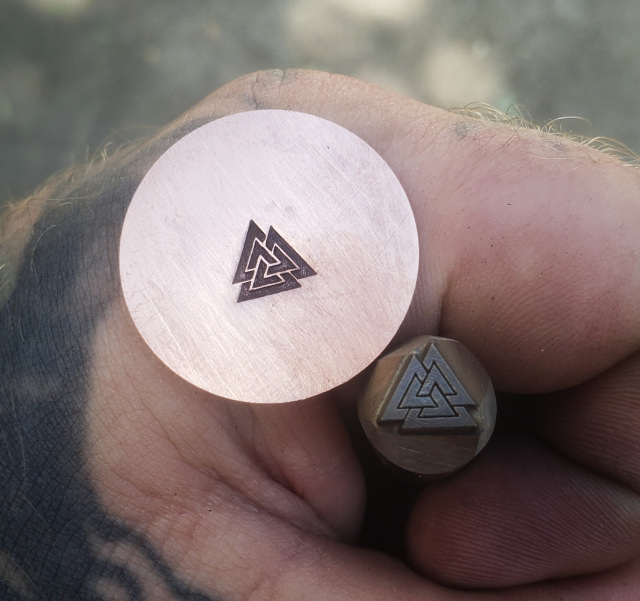 In the archaeological record, the Valknut appears only in connection with the cult of the dead, as in the aforementioned runestones and ship burial. Similar-looking symbols can also be found on the cremation urns of the Anglo-Saxons,[3] another Germanic people closely related to the Norse linguistically, ethnically, and in terms of their pre-Christian worldview and religion.

In most of these cases, Odin is also present. Even in instances where he’s not present directly alongside the Valknut, we often find other symbols that are closely associated with him. For example, the Anglo-Saxon urns feature depictions of horses and wolves, two animals that are often the companions of Odin in the Norse mythological tales.

To find associations with both death and Odin together should come as no surprise, since Odin was, among many, many other things, a psychopomp – that is, a figure who ferries the spirits of the dead to the underworld and then back to the world of the living – as well as the leader of various hosts of the dead, such as the warriors of Valhalla and of the Wild Hunt.

Odin was also one of the most powerful of all magicians and shamans. In the literary sources, Odin and his attendant spirits such as the valkyries often use magic that is described in terms of binding and unbinding, tying up the mind or untying it. In the words of historian H.R. Ellis Davidson, “Odin had the power to lay bonds upon the mind, so that men became helpless in battle, and he could also loosen the tensions of fear and strain by his gifts of battle-madness, intoxication, and inspiration.” She and others interpret the Valknut, with its knot-like appearance, as a symbolic expression of this idea.[4]

This explanation is all the more plausible since the form of heathen Norse magic that the sources mention the most often, namely seidr, used imagery related to spinning and weaving fiber to symbolize altering the course of events. Weaving in this symbolic sense and spiritual power were almost synonymous, so it should come as no surprise that a symbol involving power over life and death would be visualized as a knot.

A less satisfying explanation that some scholars have invoked is that the Valknut could be the “Hrungnir‘s Heart” (Hrungnis hjarta) mentioned in Snorri Sturluson’s Prose Edda: “Hrungnir had a heart made of hard stone and pointed with three corners, just like the carved symbol which has been called Hrungnir’s heart ever since.”[5] All that this description tells us about the visual form of “Hrungnir’s Heart” is that it had a triangular shape. That’s such a general description that the idea that Hrungnir’s Heart and the Valknut are the same symbol could only really be taken seriously if the archaeological context in which the symbol appears were to match Snorri’s description. As we’ve seen, this is far from the case. The “heart made of hard stone” is utterly incongruous with Odin’s ecstatic magic.

So, given the present state of our knowledge, we can reasonably assume that the meaning of the Valknut has much to do with death, the transition from life to death and probably back again, Odin, and the power to bind and unbind. This powerfully and convincingly suggests a particular range of possible meanings. It tells us something of its meaning, but this is so general that it can hardly be the whole picture. Was the Valknut believed to impart a particular power over life and death? If so, did it impart this power to the one who drew the symbol or to the dead person over which it was drawn? Did it help to bring about a particular desired state of being within the realm of the dead, or did it hasten the return of the dead to life, or something else entirely?

Ultimately, then, while we can be relatively sure of the ideas with which the Valknut was associated, its particular meaning is a tantalizing mystery.