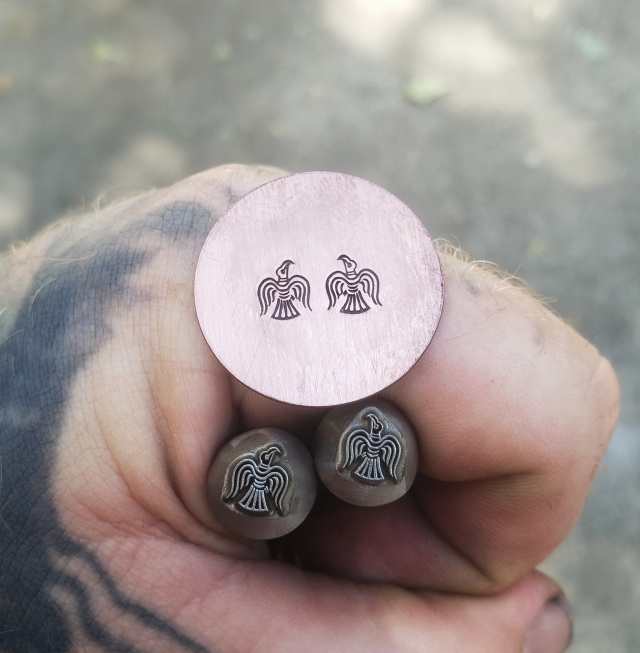 Hugin and Munin or Thought and Memory (pronounced “HOO-gin” and “MOO-nin”; Old Norse Huginn and Muninn, the meaning of which will be discussed below) are two ravens in Norse mythology who are helping spirits of the god Odin. According to the medieval Icelandic historian Snorri Sturluson,

Two ravens sit on his (Odin’s) shoulders and whisper all the news which they see and hear into his ear; they are called Huginn and Muninn. He sends them out in the morning to fly around the whole world, and by breakfast they are back again. Thus, he finds out many new things and this is why he is called ‘raven-god’ (hrafnaguð).

Snorri’s main source for this passage seems to be an evocative stanza in the Eddic poem Grímnismál, in which Odin says:

Over all the world;

I worry for Hugin

But I worry more for Munin.

The connection between Odin and ravens is very old and very deep. Already in the sixth and seventh centuries AD – well before the beginning of the Viking Age in the late eighth century – visual depictions of Odin on helmets and jewelry frequently picture him accompanied by one or more ravens.

The skaldic poetry of the Viking Age often uses kennings involving ravens to refer to Odin, and vice versa. (A kenning is a common Old Norse literary device that uses images from a body of traditional lore to refer to something rather than calling it by its everyday name.) Odin is called the “raven-god” (Hrafnaguð or Hrafnáss), the “raven-tempter” (Hrafnfreistuðr), or “the priest of the raven sacrifice” (Hrafnblóts Goði; this is surely a poetic way of describing fallen warriors as “sacrifices” to the ravens and other carrion birds, with Odin as a decider of who lives and who dies in battle). In the same vein, ravens are called “the greedy hawks of Odin” (átfrekir Óðins haukar), or else his “swan” (Yggs svanr), his “seagull” (Yggjar már), or – showing how far the bird equivalencies could be stretched – his “cuckoo” (Gauts gaukr).

Furthermore, the sight of ravens immediately following a sacrifice to Odin was taken as a sign that the god had accepted the offering.

Why was there such a longstanding and intense connection between Odin and the raven, of all species? As those kennings suggest, the answer largely has to do with Odin’s roles as a god of war and death. Ravens, as carrion birds, were present when a battle took place, and were some of its prime beneficiaries. To slay someone in battle was, in a sense, to give the ravens a gift. Countless kennings express this concept: to cite but two, the warrior is the “feeder of the raven” (hrafngrennir) and the “fattener of the battle-starling” (folkstara feitir). But the gift of a dead man also went to Odin, due to his role as the ruler of the dead in Valhalla and the common practice of symbolically sacrificing an enemy host to Odin before a battle. Thus, the association between the raven and Odin was only natural for the Norse.

This aspect of the connection is indicated by the names of Hugin and Munin. Hugin (Old Norse Huginn) comes from the word hugr, “thought.” Munin (Old Norse Muninn) comes from the word munr, which is more difficult to translate, but can encompass the concepts of “thought,” “desire,” and “emotion.” (The two ravens’ names are often translated as “Thought” and “Memory” in popular works on Norse mythology, and “Thought” is quite accurate, but “Memory” is at best imprecise and rather arbitrary.) The two names therefore can’t be neatly distinguished from one another; they overlap to the point of being virtually synonymous. This reflects the fact that, in the sources, Hugin and Munin don’t have distinct personalities. They’re a duplicate form of the same underlying idea.

More specifically, their names refer to their being concrete visualized forms of the “thought” of Odin. In the Norse worldview, the self is comprised of numerous different parts that are semi-autonomous and can detach from one another under certain circumstances. These detached parts are frequently imagined in an animal form that corresponds to their underlying character. In the case of Hugin and Munin, they’re Odin’s intellectual/spiritual capabilities journeying outward in the form of fittingly intelligent and curious birds that also resonate with Odin’s roles as a battle god and death god.

The sending forth of spiritual aspects of oneself to accomplish particular tasks – in the case of Hugin and Munin, the gathering of additional wisdom and knowledge to add to Odin’s already-prodigious store – was a common practice by historical Norse shamans and sorcerers. It should therefore be unsurprising to find Odin, the divine shaman and sorcerer, doing likewise.

This also explains why Odin fears that Hugin and Munin might not return to him. Whenever a practitioner of magic sent out a part of himself (or, more commonly, herself) on some quest or another, there was some risk that the parts would become separated from each other, or that injuries suffered by the emissary would also be inflicted upon the rest of the person who had sent it out. Such magical powers certainly didn’t come without their dangers, and even a god like Odin wasn’t exempt from them.

Sold out
Add to Cart